"The Merchants of Main Street" An Oral History Project

As you all know, my grandmother Lilian Manual had a connection to Riffs working there for many years.I remember being there at a very young age. I was born in 1970, three years before our Mha Al arrived.What I would like to say is a big thank you to all the people who made this day possible. I know we have such a dedicated group of volunteers at the Grand Falls-Windsor Heritage Society who work tirelessly all day everyday to preserve our history – and it is important.
One name I would like to mention is Beverly Butler,  unfortunately, she is not here today as you all know, but she is looking down here today with a big smile. She was so passionate about the history of the community and the two former communities.

Yes, we became Grand Falls -Windsor 25 years ago and because of it we are a better town. The name captures the history of the two former towns.We need to celebrate our history. This is something we need to keep doing for generations to come.

We have plans for the future, waterfront development and we need to intertwine our history. The story we have to tell is so unique in this community. We want to make sure that story is preserved and told. Heritage is something we all need to protect for a longtime to come. Special thank you to all who made this day happen.

Local Heritage Society member Ann Warr read a passage from Amanda Williams’s poem The Main Street Melody written in 2010. It went something like this.

Strolling down Main Street on a warm summer’s day,
My memories just happen to  whisk me away,
The sound of soldiers as they head off to war,
The site of George Stewart inside of his store.
A song and a memory so cleared my mind,
I wished to walk longer heading down the line.

Had the wonderful task back in the sixties Ed Power and myself, we wrote the history of Windsor and will try and incorporate some of the things we learned today. The train is what made these towns at first because it was the only mode of transportation. The merchants were smart  because next to Main Street was Bond Street and this is the way the town was first setup, with store fronts facing down towards Main Street. 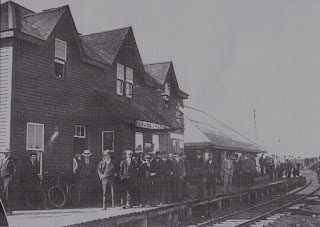 Another memory of mine was the IWA conflict. I was at the 7 PM movie with the boys and girls my age at the Vogue Theatre. My father came in and he said we have to get out of here. When we went outside everything was blocked with about a thousand people on the street.

The IWA had a building rented on Main Street and were feuding with the Company over the rights of the lumbermen in the woods.  It all boiled over when Joey Smallwood the landed lad came out the head of the IWA Union.  The body of constable Moss who had been killed in Badger arrived by train. All hell broke loose and people who were in the Union office were taken out the back and taken to Grand Falls. Mr. Oldford said it is something I will never forget.  Part of history we soon would all like to forget but it is important that we remember so it will never happen again.

During the book launch of the oral history project Lucien Forbes, President of GFW Heritage Society said that most of the pictures and films were from the Albert Hillier collection. He said there were over 8,000 negatives that were being converted. Lucien said Albert’s nephew David turned the files over to the local Heritage Society.

A copy of the book “Merchants of Main Street was also given to all who took the time to participate in the oral history project interviews. It was noted that Audrey Burke was one of the main driving forces behind the project. At the beginning of the speeches, there were an estimated 180 people who came through the doors.  Organizers were overjoyed with the turnout and the mixer of young and older people. The book the Merchants of Main Street sold out and the Heritage Society will have more available from their office at the Town Square Mall on High Street at a cost of $10.00. 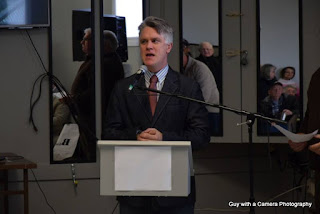 This is part of a project called collective memories where we've been helping communities tell and share their stories, to ensure that the stories live on toward the next generation. So in addition to the booklet you see today, alot of the stories Terra did, she collected through her interviews are going to be placed online through MUN’s digital archives. They will be freely accessible for generations yet to come.